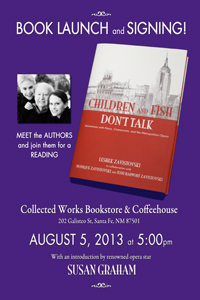 Meet the authors and join them for a reading on AUGUST 5, 2013 at 5pm. The launch will be hosted by Collected Works Bookstore and Coffeehouse, 202 Galisteo St, Santa Fe, NM 87501...

with an introduction by renowned opera star SUSAN GRAHAM.