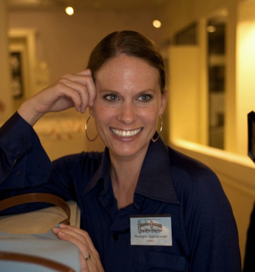 Born in New York City, Monique was raised on the edge of the Sleepy Hollow woods in Washington Irving’s hometown of Irvington, New York. She graduated in 2001 from the University of Southern California's Master of Fine Arts program in Cinematic Arts and holds a Bachelor’s degree in Psychology from the University of Pennsylvania.

Films Monique has edited, written, or produced have won awards worldwide including at the Sundance, Los Angeles, and South By Southwest Film Festivals. She is the winner of the 2006 INSIGHT award for Excellence in Editing/Story Editing for her work on The Shape of Water, narrated by Susan Sarandon. At the start of her career, she worked with filmmaker Peter Forgacs on his Getty Center installation, The Danube Exodus, and with artist Judy Chicago for a video tour of her permanent installation of The Dinner Party at the Brooklyn Museum of Art. In 2003, a Cameroonian short narrative she edited, Mboutoukou, won the Jury Prize at the South By Southwest Film Festival and at over a dozen festivals worldwide. In 2006, The Wraith of Cobble Hill, which she produced and edited, won the Jury Prize in Short Filmmaking at the Sundance Film Festival. The following year, Circus Rosaire, a feature doc she edited about a circus family of animal trainers, premiered at Slamdance and went on to win several Best Feature Doc and Audience Awards.

More recently, Monique's editing and writing work includes the PBS film The Legend of Pancho Barnes and the Happy Bottom Riding Club, featuring Kathy Bates and Tom Skerritt, which won the Emmy Award for Best Film in the Arts & Culture/Historical category, several Audience and Best Feature Doc awards, and Best Editing at DOCUTAH. In 2012 she cut The Light In Her Eyes, a window into a Qur’an school for girls in Damascus, Syria, which aired on POV and toured the world as part of the Sundance Institute's Film Forward series. She also edited The Diplomat (ESPN 9 for 9 film about East German figure skater Katarina Witt who outsmarted a dictatorship to win her freedom; 2013 Tribeca Film Festival), Life After Manson (one of the most notorious Manson Family members breaks her silence after 45 years in prison; 2014 Tribeca Film Festival; New York Times Op-Doc), and Limited Partnership (an epic love story that defined a movement; 2014 Los Angeles Film Festival; Winner IDA's Humanitas Award). She is currently cutting CITY 40 about a closed Russian nuclear city where a single mother risks her life to expose the truth in one of the most contaminated places on earth (executive produced by André Singer of the Academy-Award nominated films The Act of Killing and The Look of Silence).

Monique resides in Los Angeles with her daughter, Chloe, and her husband, filmmaker and artist, Adam Parrish King. She is currently writing her second book, The Tyranny of Noa, and some of her filmmaking work can be viewed at www.moniquezav.com.