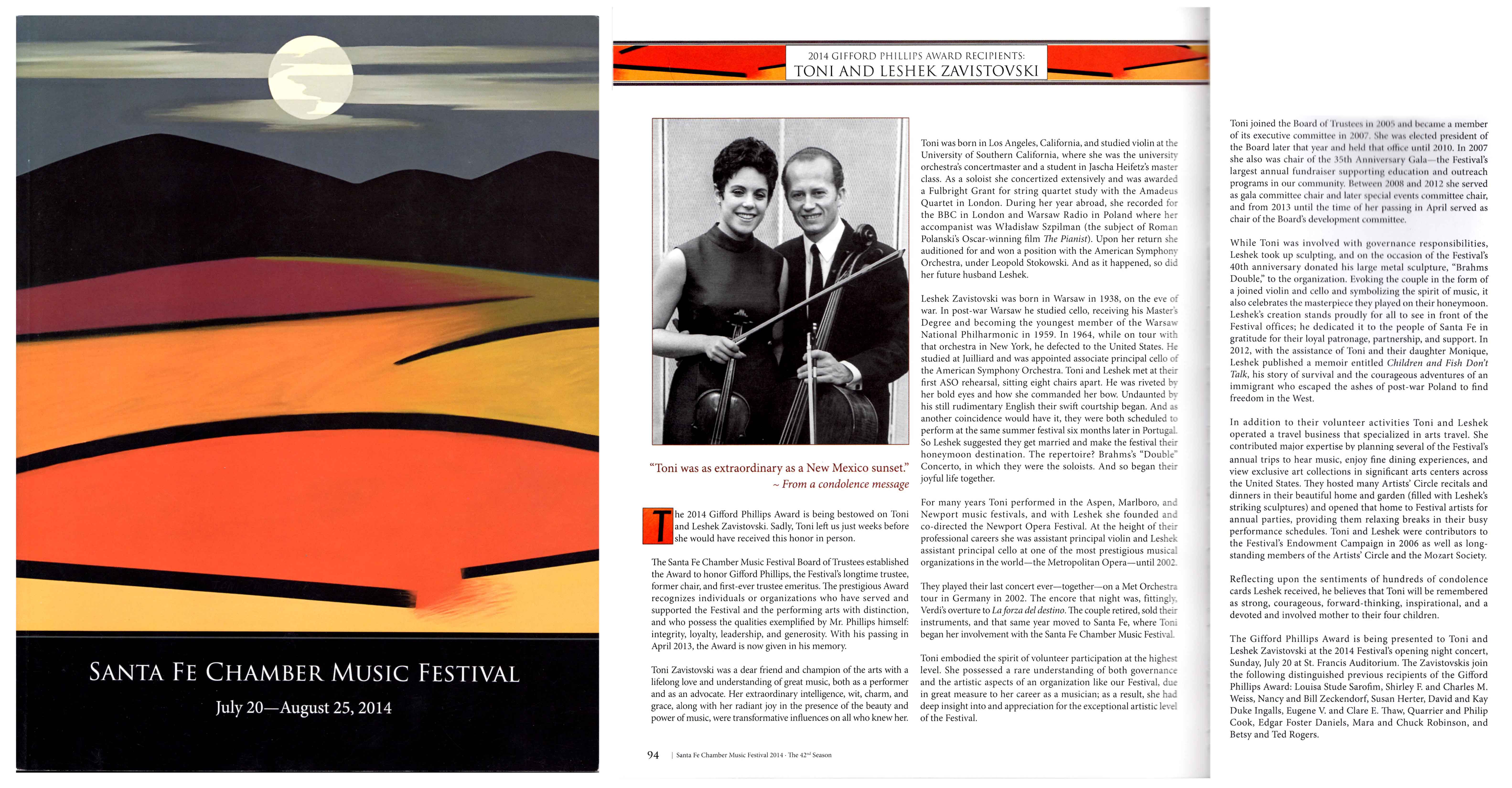 "Toni was as extraordinary as a New Mexico sunset....

The 2014 Gifford Phillips Award is being bestowed on Toni and Leshek Zavistovski. Sadly, Toni left us just weeks before she would have received this honor in person....

Toni Zavistovski was a dear friend and champion of the arts with a lifelong love and understanding of great music, both as a performer and as an advocate. Her extraordinary intelligence, wit, charm, and grace, along with her radiant joy in the presence of the beauty and power of music, were transformative influences on all who knew her.

Toni was born in Los Angeles, California, and studied violin at the University of Southern California, where she was the university orchestra's concertmaster and a student in Jascha Heifetz's master class. As a soloist she concertized extensively and was awarded a Fulbright Grant for string quartet study with the Amadeus Quartet in London. During her year abroad, she recorded for the BBC in London and Warsaw Radio in Poland where her accompanist was Władysław Szpilman (the subject of Roman Polanski's Oscar-winning film The Pianist). Upon her return she auditioned for and won a position with the American Symphony Orchestra, under Leopold Stokowski. And as it happened, so did her future husband Leshek.

Leshek Zavistovski was born in Warsaw in 1938, on the eve of war. In post-war Warsaw he studied cello, receiving his Master's Degree and becoming the youngest member of the Warsaw National Philharmonic in 1959. In 1964, while on tour with that orchestra in New York, he defected to the United States. He studied at Juilliard and was appointed associate principal cello of the American Symphony Orchestra. Toni and Leshek met at their first ASO rehearsal, sitting eight chairs apart. He was riveted by her bold eyes and how she commanded her bow. Undaunted by his still rudimentary English, their swift courtship began....

For many years Toni performed in the Aspen, Marlboro and Newport music festivals, and with Leshek she founded and co-directed the Newport Opera Festival. At the height of their professional careers she was assistant principal violin and Leshek cello at one of the most prestigious musical organizations in the world—the Metropolitan Opera—until 2002.

They played their last concert ever—together—on a Met Orchestra tour in Germany in 2002. The encore that night was, fittingly, Verdi's overture to La forza del destino. The couple retired, sold their instruments, and that same year moved to Santa Fe, where Toni began her involvement with the Santa Fe Chamber Music Festival.

Toni embodied the spirit of volunteer participation at the highest level. She possessed a rare understanding of both governance and the artistic aspects of an organization like our Festival, due in great measure to her career as a musician; as a result, she had deep insight into and appreciation for the exceptional artistic level of the Festival.

Toni joined the Board of Trustees in 2005 and became a member of its executive committee in 2007. She was elected president of the board later that year and held the office until 2010. In 2007 she also was chair of the 35th Anniversary Gala—the Festival's largest annual fundraiser supporting education and outreach programs in our community. Between 2008 and 2012 she served as gala committee chair and later special events committee chair, and from 2013 until the time of her passing in April served as chair of the Board's development committee.

While Toni was involved with governance responsibilities, Leshek took up sculpting, and on the occasion of the Festival's 40th anniversary donated his large metal sculpture, "Brahms Double," to the organization. Evoking the couple in the form of a joined violin and cello, and symbolizing the spirit of music, it also celebrates the masterpiece they played on their honeymoon. Leshek's creation stands proudly for all to see in front of the festival offices; he dedicated it to the people of Santa Fe in gratitude for their loyal patronage, partnership and support. In 2012, with the assistance of Toni and their daughter Monique, Leshek published a memoir entitled Children and Fish Don't Talk, his story of survival and the courageous adventures of an immigrant who escaped the ashes of post-war Poland to find freedom in the West....

Reflecting upon the sentiments of hundreds of condolence cards Leshek received, he believes that Toni will be remembered  as strong, courageous, forward-thinking, inspirational and a devoted and involved mother to their four children.

The Gifford Phillips Award is being presented to Toni and Leshek Zavistovski at the 2014 Festival's opening night concert, Sunday, July 20 at St. Francis Auditorium." 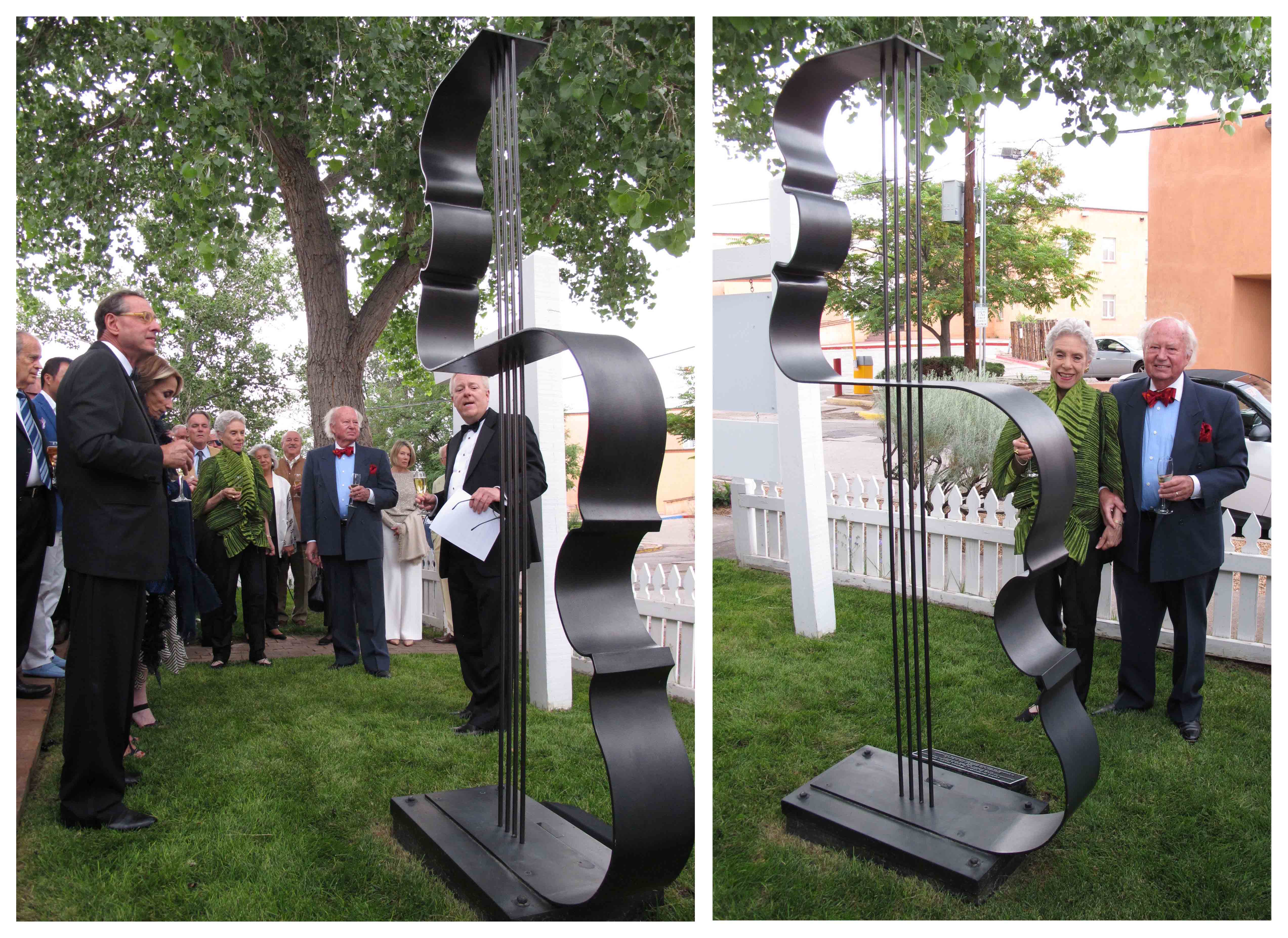